Househam‘s AirRide and Harrier self-propelled sprayers are now being fitted with a state-of-the-art X10 cab from Claas that brings in new levels of refinement and operator comfort. 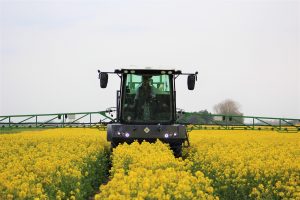 This replaces the current Excalibur unit, which was built by ABT, offering more space, a higher-spec interior and better visibility. Views to the boom have been improved in particular, with large, sweeping corner windows and a redesigned engine canopy with chamfered corners.

Standard features of the X10 include automatic air conditioning, a Bluetooth radio, three-way tilting steering column and adjustable sun blinds on all windows. There’s also a larger buddy seat with a 27-litre fridge housed underneath.

All of the vehicle and boom controls have been integrated into the cab’s original controls for a seamless operator experience, without the need to add additional switchgear.

Entry-level AirRide models will have a simpler interior spec with air-suspended cloth seat, while Harriers get a high-back leather version with climate control and heating. This will be available as an upgrade on all models though.

On both sprayers, Househam’s engineers have redesigned the mirrors to improve access, fitted LED work lights and installed a hydraulic-folding ladder with a controller integrated into the park brake. An illuminated pressure gauge has also been included, for clearer visibility when working at night.

Sprayer functions and vehicle readouts are housed in the latest high-spec TMC V6 Terminal, which is setup for auto section control (ANC) and auto nozzle select (ANS) as standard.

This has improved graphics and the option of NavGuide mapping software, which uses less processor memory than the FieldMaster system it replaces. The result is considerably faster operation when using additional functions such as individual nozzle control. The NavGuide system is compatible with most GPS setups and has the ability to import a variety of maps to suit different applications, such as variable rate application. 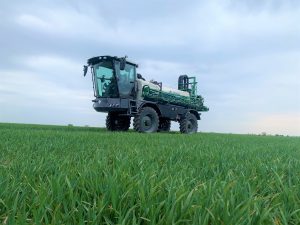 AirRide sprayers can now be specified with four- or six-cylinder Stage 5 Mercedes engines with power outputs ranging from 170hp to 240hp.

The 170hp option is a single-turbo four-cylinder, the 228hp version uses the same block with twin turbos and the 240hp version is a six-cylinder with single turbo.

These power a hydrostatic motor that drive Poclain wheel motors on AirRide 3000 and 3500 models and heavier-duty Sauer Danfoss units on all larger versions. However, buyers do have the option to upgrade the smaller models.

Unladen weight is from 6,700kg and ground clearance is 1.1m, with the option of increasing this to 1.7m.

Spray packs are integrated into the chassis and come with the option of 4,000 to 6,000-litre tanks and boom options up to 36m. Unladen weight is from 8,500kg and ground clearance is 1.1m. 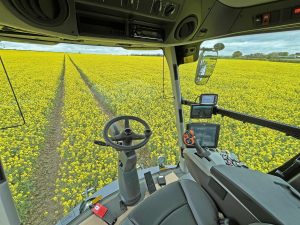 All Househam sprayers are designed and built in Woodhall Spa, Lincolnshire and the current range includes the Spirit, AirRide, Harrier and Predator.

Househam also has a UK-based global parts operation carrying a comprehensive range of spares, with over 24,000 line items in stock.