With the increasing challenges of grassweed control, growers need to take advantage of every cultural and chemical option to keep populations in check. Syngenta grassweed specialists’ research into a whole farm integrated approach and application techniques looks to provide growers with researched science solutions to get the best out of every situation.

Getting application spot-on at the pre-emergence timing isn’t always straightforward but incredibly important as the foundation of ‘the stack’. CPM finds out how their potential efficacy can be maximised.

Herbicides remain an integral part of the overall integrated approach to the blackgrass problem. But as successive post-emergence products have lost efficacy with their activity, the main chemical contribution to its control is now delivered by pre-emergence residuals.

The pre-em timing is a tricky one. Soils are still warm, yet the air temperature is cooling rapidly. If the jet stream is in the right place, it’s often a windy month with low pressure systems feeding across the country. Ideal spray days can be few and far between, making it even more difficult to get application timing spot-on.

Syngenta’s application specialist, James Thomas, explains how to keep the spray on target and maximise the potential efficacy of pre-em herbicides, along with the results of new research at Silsoe’s Spray Application Unit testing 90% drift-reducing nozzles.

Why is the pre-em spray important?

Pre-em herbicides are now the mainstay of autumn blackgrass programmes, providing the foundation for the residual stack that’s seen as essential to prevent weed populations from escalating.

With such widespread resistance to most post-em herbicides, it’s more important than ever to optimise performance of the initial pre-em applications and that means getting an even distribution of spray over the soil.

One of the key challenges is drift, which takes product away from the target. Drift risk is typically greatest at the pre-em timing because there’s no crop to intercept and trap spray droplets.

It’s compounded by cooling weather conditions in the autumn, which frequently means there’s a temperature differential between the soil and the air. This can lead to air warmed by the soil rising and lifting fine spray droplets up into the atmosphere where they can be carried away, even in relatively light winds.

Why does size matter?

These smallest droplets, without the energy and momentum to reach the ground, are most prone to drift. When some of these ‘fines’ are carried away from the spray plume, the result is uneven spray deposition and variable control.

There are several factors that contribute to this drift but one that makes an important impact is wind speed. Furthermore, the greater the distance between the nozzle tip and the application target – as dictated by boom height – the greater the impact wind can have on drift.

How can nozzle technology help?

Since achieving even distribution over the soil is an important part of achieving good efficacy with pre-em herbicides, nozzle selection is important. AHDB-funded trials have shown air-induction nozzles are capable of delivering the required efficacy, with a lower propensity to drift.

Most drift-reducing nozzles are of the air-induction type, and these currently give the highest levels of drift control.

How does AI nozzle technology work?

To engineer drift reduction, air-induction nozzles have two separate liquid orifices, the first one controls the flow rate and the second one controls the spray formation. Between the two orifices, a venturi draws in air which mixes with the liquid and produces droplets containing air bubbles. The amount of air inside the droplets depends on the specific design of the nozzle, but also on the properties of the chemicals in the tank mix.

Some small droplets are still produced, so drift isn’t completely eliminated but it can be significantly reduced. Comparative nozzle trials have been evaluating air-induction nozzle designs, and specifically 90% drift reduction technology, to determine which can best optimise pre-em herbicide control.

What work has been done on these?

New research with wind tunnel studies led by Dr Clare Butler Ellis at Silsoe, using the same techniques designed to evaluate LERAP star ratings, have shown that drift-reducing nozzles have the potential to keep drift at low levels at wind speeds of up to 5m/s, measured at boom height.

The research demonstrated that at a consistent wind speed of 4m/s, the tested 90% drift-reducing nozzle technology produced 80% less detectable drift compared with a standard flat fan nozzle operating at a wind speed of 2m/s (see graph 1). The Teejet TTI110-05, operated at 2.0 bar, was the best performing nozzle tested for drift reduction capability and the least affected by wind speed.

These findings do not necessarily imply that these nozzles can be recommended for use in higher wind speeds than the current code of practice suggests, because there are additional factors that need to be taken into account.  But the data shows that there’s considerable scope for increasing the flexibility of the conditions under which spraying can take place when such nozzles are used.

Air-induction nozzles have been the recommendation for pre-em applications for many years, as shown in the HGCA nozzle selection chart. Their use has an important role to play, even when not required on the label. The sprays they produce are much less influenced by air flows – whether caused by the wind or by turbulence generated by the moving sprayer – leading to the spray being most uniformly distributed over the field.  The right nozzle and pressure and a low, stable boom are key factors in minimising off-target drift and maximising efficacy of pre-em herbicide applications. 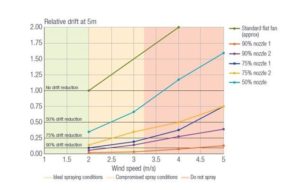 How can drift be reduced?

To counter drift there are some key principles to get right during application, forward speed, boom height and nozzle selection. In practice, operators will also need to consider water volume, which will be a factor influencing operating speed and nozzle size selection.

The faster the forward speed, the more turbulence is inevitably created behind the boom. In addition, boom stability decreases (to a greater or lesser extent depending on sprayer design and field conditions) leading to higher levels of drift.

Boom height is the single most controllable factor during application with 50cm the optimum for most nozzle designs. Where boom height exceeds 50cm, the incidence of spray drift rises correspondingly.

Last autumn was widely considered to be a favourable one for spray application. But Syngenta analysis shows there were actually only five ‘ideal’ days for spray application in Cambs from 15 Sept to 31 Oct. In compromised situations, opting for a 90% drift-reducing nozzle could help ensure that the spray hits the target and maintains a more even spray pattern.

What work has Syngenta done on efficacy?

The Syngenta Blackgrass Focus Innovation Centre at Barton has been investigating the effect of application on herbicide efficacy, including the use of drift-reducing nozzles, and has three seasons’ data with highly consistent results.

In 2018, the 90% drift-reducing nozzles achieved 91% control of blackgrass from a robust farm practice herbicide stack at a highly challenging blackgrass site, compared with 73% using a flat fan nozzle at 50cm.

When comparing the effects of boom height, there was an average 13% reduction in blackgrass control from operating at one metre, compared with at 50cm using flat fan nozzles. The trials showed 90% drift reducing nozzles were less adversely affected by boom height.

In two seasons of trials looking at forward speed, reducing speed from 16 km/h to 12 km/h increased rates of blackgrass control from the pre-em herbicide application by a third. Further reducing speed did continue to improve control rates, but to a lesser extent.

Results at Barton and other Syngenta trials sites have highlighted that in some situations where good control had previously been achieved with water volumes at 100 l/ha, increasingly a move to 200 l/ha can give the edge, helping achieve the marginal gains necessary to maintain grassweed populations.

How are DR nozzles best used? 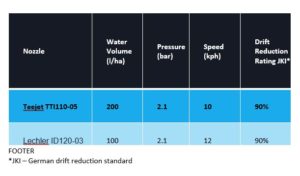 With 970ha of arable ground to get around, making the most of possible spray days is an important consideration for Nick Stevens, arable manager for A4 Farms in Calne, Wilts.

As a former Farm Spray Operator of the Year winner, Nick is part of Syngenta’s application club and is always keen to try new ideas. When his new Househam Merlin sprayer was delivered with a set of 90% drift reducing nozzles already fitted, he decided to give them a go.

“I’d already been looking at the potential for 90% drift reducing nozzles. A lot of our land is situated around Avebury, so there are members of the public close by and making sure there’s no drift is vitally important,” he says.

Nick believes getting the timing right is an important part of applying any spray, and especially where blackgrass is the target. That presents a problem with one sprayer, a large arable acreage and a time of year when spraying opportunities can be limited by the weather.

The farm is employing a range of cultural measures in the fight against blackgrass and has largely moved to a minimal soil-disturbance system over the past three years, with visibly improved results.

“We use a stubble rake as a chitting tool and have a grassland subsoiler to tackle any compaction problems. Even though our soil is light, it does have a tendency to slump.

“We found we were creating too much disturbance with the drill and bringing up blackgrass seeds, so we’ve changed to a minimal disturbance, Great Plains Saxon 4m drill.”

The oilseed rape on the farm is strip-tilled, planting on 60cm rows at a seed rate of just 20-30 seeds/m2, which gives an open target for blackgrass and produced yields of 3.7-4.3t/ha this harvest.

Nick has been so impressed with the performance of the 90% DR nozzles that he’s using them all-year round, including for fungicide application.

“The principle of applying a coarser spray goes against everything we’ve been taught about the spray quality that’s needed to get good coverage, but it really seems to work,” he says.

“We’re getting good efficacy on blackgrass from pre-ems in the wheat, a brilliant kill from Falcon (propaquizafop) in the OSR and Kerb (propyzamide) later in the year. Where product labels and buffer zones permit, I can also spray right up to the stewardship margins and know it’s not going to be a problem,” he adds.

One thing Nick has moderated is his application speed, reducing it from 14km/h to 12km/h and he says this has really helped improve his spray application. Monitoring boom height is an easy job, with ultrasonic sensors making sure his 30m boom remains at the 50cm optimum height above the target.

For water volume, Nick currently still opts for 100-150 l/ha purely because this gives him the work rate to get around his acreage without compromising on timing.

“We don’t yet appear to have lost any efficacy using a slightly lower water volume in our system. Last year we split a field, spraying half at 100 l/ha and the remainder at 200 lt/ha with no visible differences.”

We use cookies to ensure that we give you the best experience on our website. If you continue to use this site we will assume that you are happy with it.OkRead more