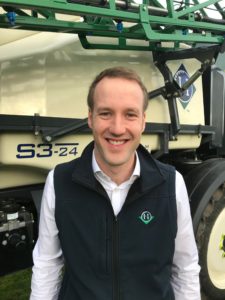 We’re excited to announce the promotion of Phil James, our engineering manager. Phil will now be Househam’s engineering and quality director, leading the whole engineering department and in charge of business improvements.

Based at our Woodhall Spa HQ, Phil only joined Househam in 2017, but has made a significant impact in the short time he has been here.

Phil has started his new position at an exciting time for Househam, with the launch of our new ‘operator-inspired’ self-propelled sprayer the HARRIER. Designed and built in Lincolnshire, the HARRIER is the latest addition to the Househam range.

The ‘next generation’ machine comes fitted with Househam’s trademark Total Machine Control (TMC) V3 and FieldMaster GPS advanced on-board operating system, delivering what its makers believe to be the most efficient and precise sprayer application in its class.

Phil’s appointment coincides with the recent completion of phase one of our factory expansion which has doubled our production capacity. Phase two is now planned for completion by the end of 2018.

“Phil’s promotion is fantastic news for the company. He’s been a valuable asset since he joined the team, and I can’t wait to see what the future holds for Househam as he progresses. His appointment comes at the same time as the launch of the HARRIER and he has some exciting ideas for the future.”
Rob Willey, managing director, Househam